Difference between revisions of "Manual:Alias Engine"

Alias react on user input. Mudlet uses hierarchically ordered powerful Perl regex expression alias. We have explicitly chosen not to offer multi condition alias, alias chains or the same trigger types the trigger engine offers because this would be way over the top and is simply not needed for alias expansion - although it should be noted that the processes are closely related, except that aliases, i.e. input triggers, operate on a different data stream, namely the user input stream, whereas triggers operate on the MUD output data stream. The only real difference between output triggers and input triggers is that input triggers can change the input stream they work on, whereas output triggers cannot change the stream itself - output triggers can change what is printed on the screen as a result of the stream, but they cannot change the stream itself. This is a fundamental difference and a deeper understanding is key to getting to grips with Mudlets alias engine. When you enter a command on the keyboard and press enter or return, the text that you have typed in the command line will be forwarded to the alias unit, i. e. the input trigger unit, in form of the Lua variable command. This variable will be matched against all active alias in the hierarchy unless access to an alias branch is locked by the user or by a script. If an alias matches, it will intercept the user command and the original command will be ignored. Upon a match the clear text command is being send as a command to the MUD in replacement of the original command, if a clear text command has been specified by the user and the attached alias script is being executed. However, the initial command that the user has typed in the command line will not be sent unless you do this as part of your script. Consequently, if you want your alias to send a command to the MUD, you’ll either have to specify a clear text command for simple cases or send commands via the attached alias script e.g. send("kill monster"). You may argue that you feel that it is unnecessary work to be forced to send a command replacement yourself, but this very fact makes our alias system way more powerful because it gives you complete control about what is happening. Why is this so? The initial user command is being held in the Lua variable command. When this value changes within the alias unit processing chain, the initial user input that the aliases work on can be rewritten and changed in the process. Consequently, you can substitute the user input step by step - or alias by alias - without that anything happens as far as sending commands is being concerned unless you explicitly decide to do so. 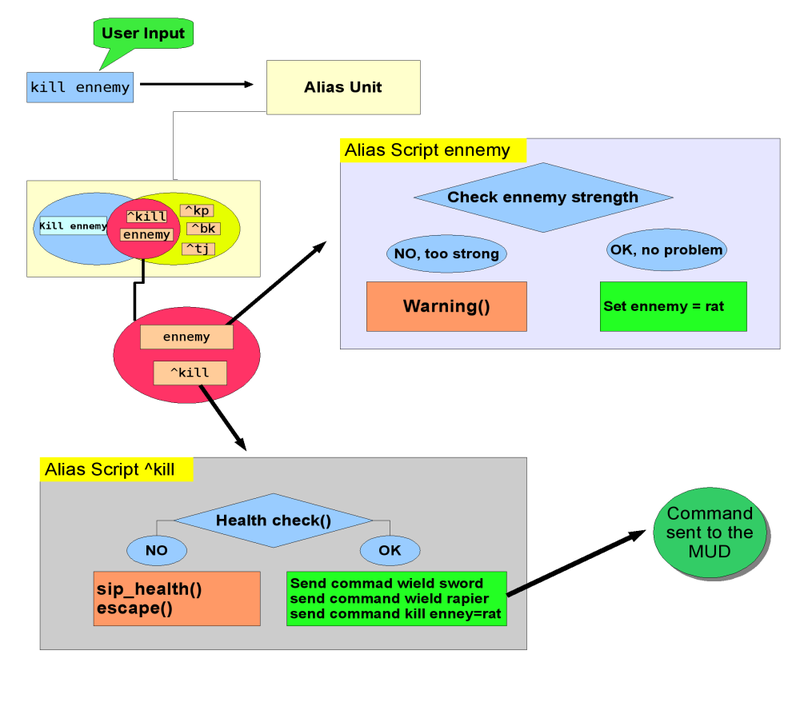 The example in the diagram above shows 2 matching aliases, but only one of them sends commands to the MUD - and only if the player is healthy enough to attack the opponent. The other alias that matched the user input (enemy) choses a fitting opponent and sets the variable enemy accordingly, otherwise it issues a warning that attacking one of the available enemies would be too dangerous.

For an alias to match the command text the same rules as explained above in the trigger section apply. However, to simplify matters there is only one alias type. As alias are not performance critical we could reduce the amount of trigger types to just Perl regex as this type can do it all and performance is no issue with alias as the amount of data is much less. Even if you type like a madman you’ll never get close to sending the same amount of text to the MUD than the amount of text the MUD sends back to you.

What does it mean that a regex is true or "matched"? A trigger or an alias fires - or executes its commands/script - when the text matches the pattern of the trigger or alias. In most cases this means that the text contains the trigger/alias pattern. If the regex pattern is reen then a text "The green house" will match because "reen" is contained in the text. More complex regex patterns can also hold information on where in the text a certain pattern must occur in order to match. ^tj only matches when the letters "tj" occur at the beginning of the text. Consequently, a text like "go tj" would not match. Regex patterns can also capture data like numbers, sequences of letters, words etc. at certain positions in the text. This is very useful for MUD related scripting and this is why it is explained below.

We want Mudlet to send "put weapon in bag" whenever we type "pwb". Consequently, the pattern is pwb and as the task is so simple it’s enough to enter "put weapon in bag" in the send field. Then we click on save to save the changes and activate the alias by clicking on the padlock icon. Then we leave the trigger editor and test our new alias. After typing "pwb" and pressing return Mudlet will send the command "put weapon in bag" to the MUD.

We want our script to automatically put the weapon in the correct bag as we have many bags and many weapons. The pattern stays the same. ^pwb The ^ at the beginning of the line means that the command starts with pwd and no other letter in front of this. If we define our pattern more clearly, the pattern will match less often. Without the ^ the alias will match and the alias script will always be run whenever there is the sequence of letters "pwd" in your commands. This may not always be what you want. This is why it’s usually a good idea to make the pattern definition as exact as needed by being less general. The more general the pattern, the more often it will match.

Depending on the values of our variables Weapon and bag the command "pwd" will be substituted with an appropriate command. To set your weapon and bag variables we use 2 more aliases: Alias to set the weapon: uw (\w)+

Default keybindings in the input line