Here you'll find some of the commonly known issues on Mudlet - and possible fixes to them.

Have you ran into an issue with Mudlet? If you're unsure about it, visit our Help Forum and post a new thread; we'll help you solve the problem.

If you're certain you've found a bug (a problem) in Mudlet, please report it to us on our bug tracker. Please be generous and submit bug reports instead of not - it can happen that you're the only one who has ran into an issue, and if you don't let us know about it, it likely won't be located and fixed. We do want you to have the best experience using Mudlet!

The current list of Mudlet issues is publicly available, and you can view it here.

If your Windows Registery becomes corrupted, it can adversely affect many programs, including Mudlet: 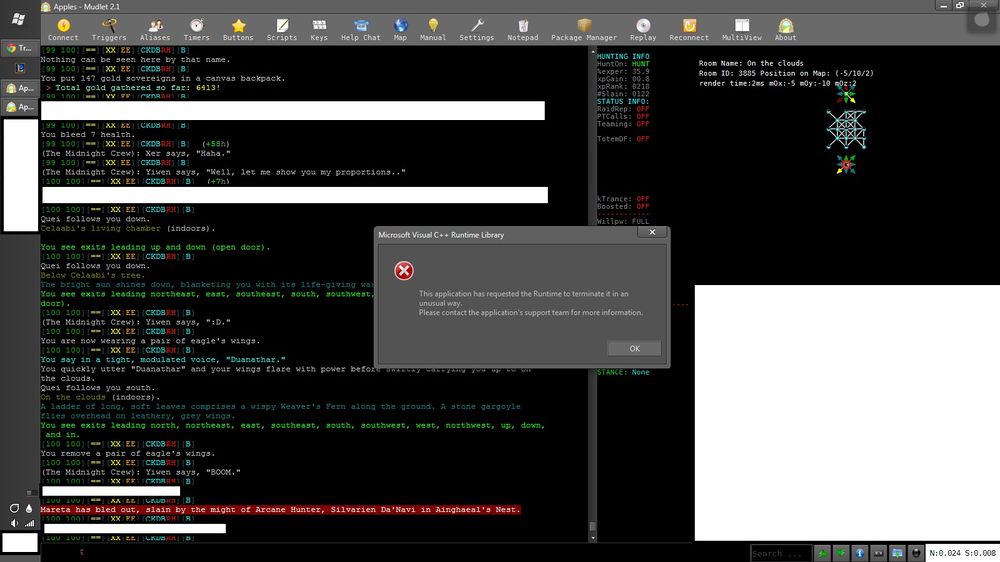 This issue isn't one that is caused by Mudlet and there are no specific instructions available - try fixing your Windows registry in order to resolve the issue.

More recent versions of OS X have developed an issue where when you go to select a Mudlet package for import, the file selection dialog gets opened up behind the Mudlet window, and is inaccessible. Because Mudlet is unresponsive while you are selecting the file, it appears that it has frozen.

Try to either move the Mudlet window out of the way to show the file chooser dialog, or use the installPackage() function to select your file instead.

When importing a package, the file chooser dialog shows up and goes away

Again an issue on recent versions of OS X - when you open the file chooser window to select a file, it shows up and then goes away.

Try creating many (~10) new files in the folder that the file chooser opens in - it might stick around then. The issue seems to be that OS X is when there aren't enough files in a folder, OS X tries to select a non-existent file and the file window crashes.