The IDE that several Mudlet developers use for working on the project is the Qt Creator IDE. It has an add-on (it calls them "plugins") that is not active by default but which can help developers to find previous marked spots quickly which can enable one (or a group of) commonly edited spots to (all) be visited quickly, even if the relevant file is not currently opened within the project.

To activate it go to the Creator Help menu and select the About plugins... item:

Accessing the "About Plugins..." dialog

On the dialog that is displayed, scroll down to the Utilities section and locate the item called "Todo (experimental)" - if it is not set to be loaded (so is not available for use) it will have a red minus sign or other negative state mark to the left of the name and the check-box in the "Load" column will be cleared:

Check the box in the "Load" column and an advisory message saying "Restart required." will be shown on the bottom in the middle of the buttons. Click close and a choice will be offered to either "Restart Now" or "Later" - make the choice that is most convenient (which will probably depend on whether files are already in the middle of being edited!)

When Qt Creator has been (re)started there will be an extra numbered "To-Do Entries" item at the bottom of the application window which can be selected to show various predefined identifiers that can be embedded into the source code - clicking on an entry will open the relevant file at the associated point. The list shown can be sorted in several ways and clicking on one or more of the icons at the top of the window can be used to restrict the display to that type of entry:

The entries are formed from C and C++ single line comments and are classified by the text (first word) that appears after the // comment delimiter. In Mudlet a couple have been used that do not appear in the predefined list of:

{TBD - the above needs verification by someone who's system has not used this feature before!}

A couple of extra entries have been used within the Mudlet project (including "PLACEMARKER" for some locations that need to be edited or have new code entered often) and those (or any other) can be changed via the Tools - Options menu: 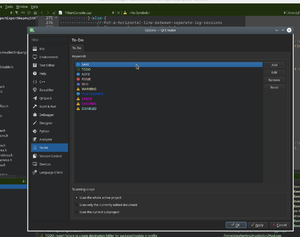 New entries added to this list do not get shown until the next time that Qt Creator is started!